Durant was ranked as the fastest growing rural city in Oklahoma in 2004, having the fastest growth rate outside of the Oklahoma City and Tulsa metropolitan areas. Today, the city is ranked as one of the fastest growing cities in the country. Less than ten miles away, Lake Texoma has between 8-10 million tourists every year and is the 12th largest man-made lake in the United States, and also one of the largest reservoirs in the country, contributing to Durant's economic and population growth. Durant is home to Southeastern Oklahoma State University and also the Headquarters of the Choctaw Nation of Oklahoma, though the historic capitol building is in Tuskahoma. Durant ranks as the second largest city within the Choctaw Nation, following McAlester, and ahead of Poteau. The city has officially been recognized as the Magnolia Capital of Oklahoma, and the SOSU campus is known as "The Campus of a Thousand Magnolias." 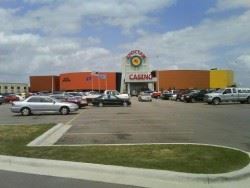