Create an Account - Increase your productivity, customize your experience, and engage in information you care about.

In the beginning, a family of French-Choctaw origin followed the immigration of the Choctaw Nation from the Valley of the Great River, the Mississippi. The Cherokee’s journey chronicled as “the Trail of Tears, heartaches and death,” ended in a new country west of the Territory of Arkansas and situated between the Red River of the South and the South Canadian River of the north. The claim extended west to Mexico, which is now the eastern boundary line of the northwest Texas territory commonly known and called the “panhandle.”

Pierre Durant, pronounced DuRant in French, and his four sons made the trudge down the Mississippi on the way to the southeastern part of the Choctaw Nation in 1832. The brothers, grown, with families of their own, established homesteads from the Arkansas line to Durant.

One son, Fisher, married to a full blood Choctaw, found a beautiful location for a home between Durant’s present Eight and Ninth Avenues. His son, Dixon Durant is recognized as the founder of Durant and is honored with his namesake. As an early day minister, businessman and civic leader, Dixon Durant is credited with pastorates in local Presbyterian, Congregationalist and Methodist churches; establishment of the first store selling general merchandise; and possibly influencing the 1872 erection of a Missouri-Kansas-Texas Railroad (Katy Railroad) siding at Durant, thus producing the initial impetus for establishing the community. 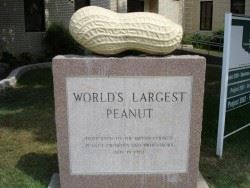