Public Alert 2020-32 RESOLUTION TO EXTEND THE STATE OF EMERGENCY DUE TO THE COVID-19 Read On...

Create an Account - Increase your productivity, customize your experience, and engage in information you care about.

Our volunteer chaplains program officially started in December 1997 with the appointment of LaWanda Mabery as chaplain. The officers nicknamed her "Chappy" and that's the name she went by. Chappy was a member of the professional organization, International Conference of Police Chaplains (ICPC) and she received an award from the Regional ICPC for "Excellency in Chaplaincy." The Baptist General Convention of Oklahoma also named Chappy "Chaplain of the Year."

In March of 2011 Chaplain Bill Ledbetter, minister at Fairview Baptist Church in Durant, joined Chappy. Bill has taken all the required training for Basic Certification in ICPC. Chappy passed away March 14th 2014 and is missed dearly.

Bill Has served as a trained and approved volunteer Chaplain at the prison in Bohnam, TX. At the prison he led two teams for twice monthly prison ministry. He has also been involved in ministry with the Baptist General Convention of Oklahoma and Bryan Baptist Association.

Chappy had represented our department as a Disaster Relief Chaplain in Arizona for the forest fires and went to Florida for hurricanes Charlie and Ivan. She helped the victims and also encouraged the disaster relief workers.

"Chaplains are responsible for the organization and development of the spiritual organizations in the department, and provide counseling for officers and other personnel," said Chaplain LaWanda Mabery. "We are involved in public relations efforts and provide liaison with other religious leaders in the community, give death notifications and assistance to victims." 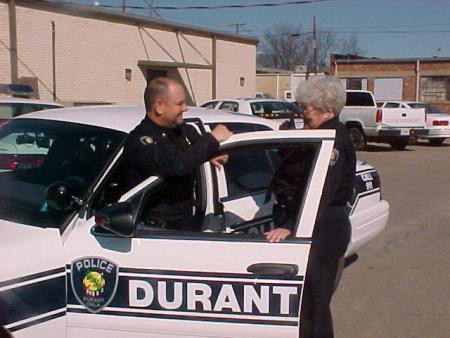